It is widely known that smartphone users are holding on to their devices longer as they upgrade to a new model less often. This lengthening of the replacement cycle is negatively impacting Apple's iPhone sales. The frequency at which smartphone users purchase new models has been slowing for many years now, but the impact has been less apparent. Sales to new users masks the declining sales to current users. If the percentage of iPhone purchasing a new phone in a year drops from 50% to 40%, sales will decline 20% Y/Y unless the 10% shortfall is offset by other sources of demand, such as first-time smartphone buyers or Android users. If sales to new iPhone users considerably outweighs the slowdown in replacement demand, it is hard to detect that change in purchase behavior. When the market becomes saturated and sales demand is dependent on current users, any slowdown in upgrades surfaces to the forefront.

The 4 major US wireless carriers report the percentage of their subscriber base that upgrades their device in that quarter, and the sum of those 4 quarters equals the annual upgrade rate. A 50% annual upgrade rate implies replacement cycle of 2 years, 25% would be 4 years and so on (1/.5, 1/.25). The upgrade rates carriers report understate the level of replacement activity as it only captures upgrades from THEIR current subscribers. Upgrades that occur at a new carrier when a subscriber switches wireless service aren't reflected in those figures.  To account for those upgrades that carriers classify as gross adds, I use churn rates as a basis for an adjustment assumption. With out an adjustment, the upgrade cycle has extended from 3 years (2010) to recently (2018) longer than 4.5 years. We know that is too long, which is not a surprise since upgrade activity is not full captured. After adjusting, those rates go from 2.23 years (2010) slowing to 3.46 years in 2018.

I estimate the current replacement rate is around 3.5 years on average. Both AT&T and Verizon have a 80-85% take rate for installment plans on smartphone sales. The percentage of subscribers on installment plans has been stuck at 50% for more than years now at both carriers. If 85% of subscribers took an installment plan and upgraded every 2 years, then the percentage of subscriber base on those plans would be 85%, not 50%. That 35% represents users that were on installment plans that have since ended but have not upgraded to a new model. Doing the math, only 58% of smartphones (in use) purchased on installment are 2 years or newer, conversely 42% are older than 2 years. This equates to a 3.4 year replacement cycle which is consistent with the figure I calculated based on the method mentioned earlier.  The absolute number is not as reliable or as important as the trend. The trend explains a lot and is illustrated in the charts below.

In the Fall of 2014, Apple introduced its first iPhone with a large screen display-The iPhone 6 Plus. The decline in upgrade rates quickly reversed as iPhone sales surged due to the considerable amount of pent-up demand for a large display iPhone model. After iPhone Plus mania subsided, upgrades rates resume their decline and have really collapsed in the last 2 years. When / Will we see another event like 2014? A massive upgrade cycle or "super cycle" has been expected for two years now, yet it has not materialized. However, an iPhone that is not upgraded this year, is an iPhone that might be upgraded next year. iPhones do not last forever; eventually, they will have to be replaced. As iPhone owners hold on to their devices longer, the amount of pent-up demand for future iPhones increases. So while Apple may have periods of weak iPhone revenue resulting from soft upgrades, there will be periods when upgrades rebound generating strong iPhone sales. 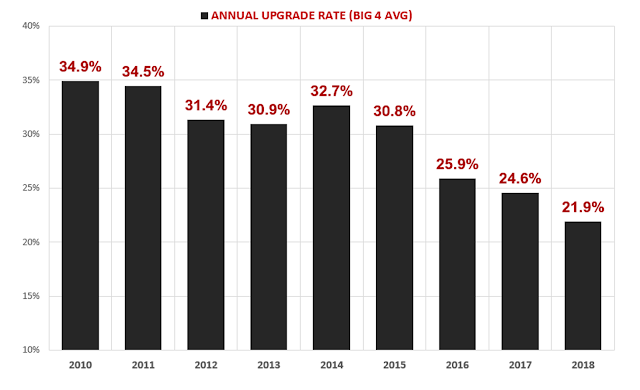 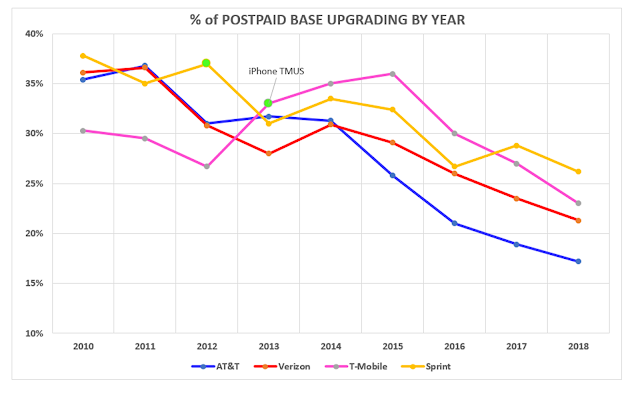 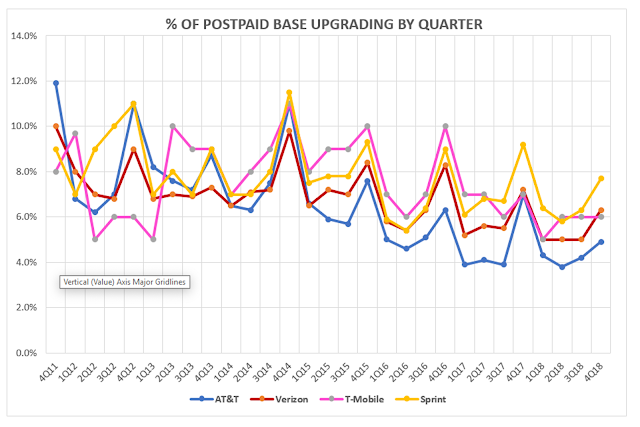 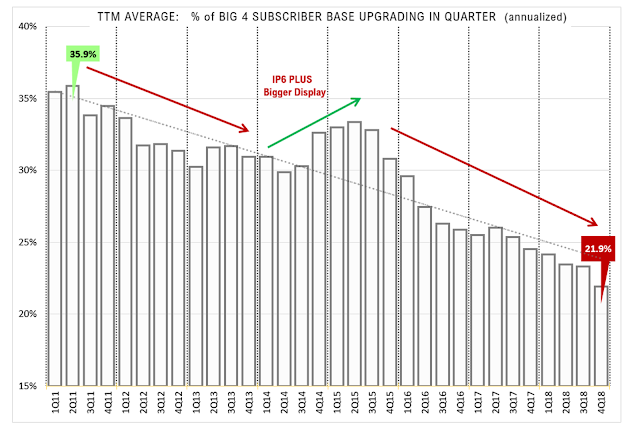 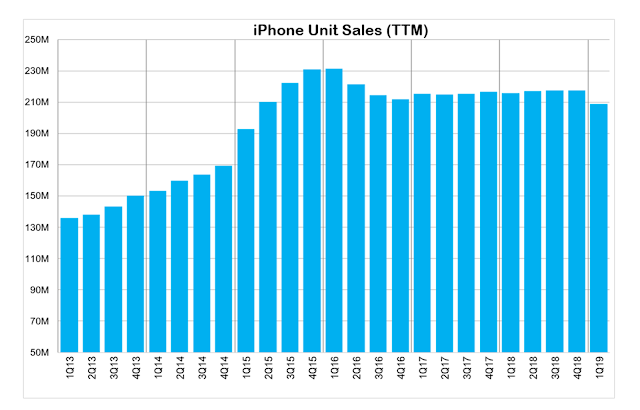 Posted by Turley Muller No comments: Links to this post

As depicted in the graphs below,  Apple's revenue and EPS consensus estimates have come way down.  The first sharp drop occurred in the beginning of January when Apple warned it would not meet guidance and issued a revised revenue forecast that was $7B lower than its initial guidance. The stock bottomed around $142, and gradually rose through the rest of January to the mid $150's- even as consensus estimates were still falling. After Apple reported Q1 results at the end of January, estimates took another leg down, but Apple's stock price jumped to over $170. Apple's stock price has anticipated decreases to consensus estimates as analyst revisions have lagged stock price movements. Apple's stock began its decline when it reported Q4 results at the beginning of November. Apple issued weak guidance and announced it would no longer report unit sales. The stock took a steep dive, but estimates only decreased slightly. And while estimates have dropped significantly in recent weeks, Apple's stock has rallied. This suggests that the bad news has been priced in, and that the market expects revisions to stabilize or perhaps even rise. 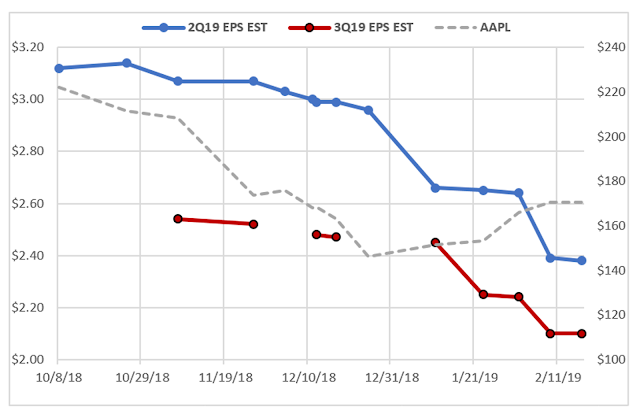 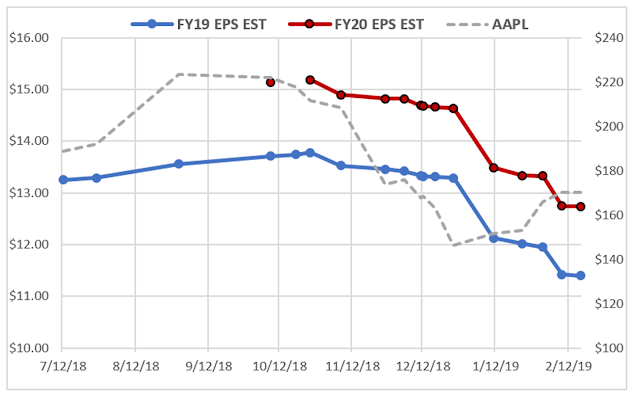 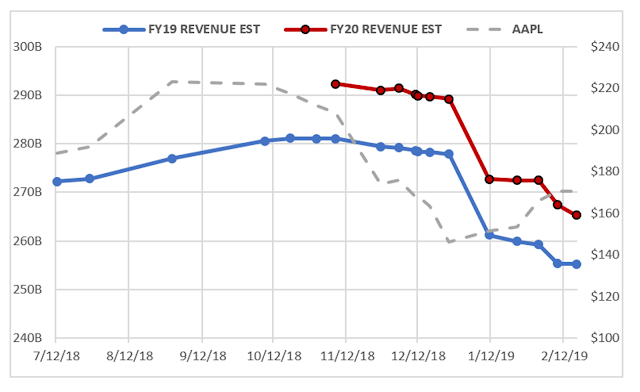 The table below highlights what appears to be a disconnect between revenue and EPS estimates. Revenues are expected to fall mid-low single-digits, but EPS is forecasted to decrease much more, as much as double-digit declines for Q2 and Q3. If we assume that Apple repurchases 125M shares each quarter, then net income based on those share counts coupled with consensus EPS estimates points to even a much larger Y/Y decline in net income. Those net income levels imply 300-plus basis point drop in net margin. Does this make sense? 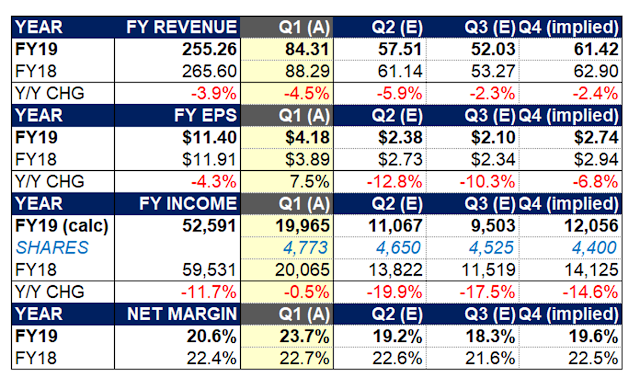 As we saw in Q1, sales dropped 4.5%, but EPS rose 7.5% due to two factors. 1) EPS benefited from a lower share count. 2) Net income only fell 0.5% due to a lower tax rate boosting net margin by 100 basis points.  Thus, with Apple expected to buyback considerable amount of stock, one would expect EPS to perform better than revenue as seen in Q1. However, upon closer analysis the forecasted relationship between sales and EPS appear to be reasonable.

There are 3 factors or headwinds that could offset the benefit of a lower share count. 1) Lower revenue causes a loss of operating leverage as fixed costs are spread over a smaller revenue base resulting in margin compression. Gross margins are pressured by depreciation expense that is independent of sales volume. Aside from depreciation, there are other fixed costs that affect gross margins. 2) Operating margins are affected by the levels of SG&A and R&D expense which are relatively fixed. R&D has been rising at a much faster pace than revenue for several years. With an expected smaller revenue base, these expenses will compress operating margins if they are at levels equal to or higher than last year's. 3) Higher tax rates will compress net margins thus negatively impacting net income. Apple is guiding to a tax rate of 17% for Q2 vs. 14.5% for the year-ago quarter. Apple's tax rates for Q3 and Q4 last year were 13.3% and 14%, respectively. If 17% is the norm for the remainder of FY19, then net margin will be negatively impacted.

Posted by Turley Muller No comments: Links to this post

5G Primer and Expectations (for early stages of US 5G networks)

5G is often described as revolutionary, delivering 20 gigabit speeds with near zero latency that will enable a number of disruptive technolo...