Apple Inc. (nasd:AAPL) $152.65- Apple introduced the new 3G iPhone model on July 11, and sales thus far look to be impressive. Using the OS market share data from Net Applications and the IMEI tracking data from the Mac Observer’s Apple Finance Board, iPhone sales appear to have approached 6 million units since launch. By the end of this quarter (Q4), I predict iPhone sales will reach 7-8 million. Most estimates on the Street are calling for unit sales to come in under 5 million units. Perhaps the most important aspect is the effect on cash earnings. Since Apple spreads iPhone revenue over 8 quarters, reported EPS will see little effect. However, cash earnings should increase more than $2.00.

I estimate Apple has sold roughly 6 million 3G iPhones with 3 weeks still left in the quarter. Q4 sales could hit 7 million, or more, with the aid of a couple factors.

Supply dried up at all points of sale after the first weekend. Apple stores received the bulk of new shipments as AT&T and foreign providers were strained for several weeks. About mid-August,  the production ramp and demand levels showed signs of equalizing. It wasn’t until late August that AT&T stores began to have on-hand inventory since running out on the initial launch. Apple records iPhone sales when shipped to carriers opposed to Apple retail stores, which are recorded when sold to the end-user. As demand is starting to normalize along with Apple’s retail store inventory stabilizing, focus will shift to supplying the channel. This comprises of AT&T stores, foreign carriers from both the July and August launches, and BestBuy. With 6 million likely sold thus far, sales should surpass 7 million by the end of the quarter from replenishing the channel and consumer sales.

Net Applications estimates OS market share from internet usage data. Since the 2G iPhone supply dried up in May and June, the installed base essentially remained static at 6.12 million units during that time. As measured by Net Applications, iPhone OS share remained steady at around 16.5 bps for those two months. That equates to roughly 370 units per basis point of market share. Using the share data since the 3G launch, unit sales of the new iPhone model can be estimated.

There appears to be some aberrations in the Net Application survey data as the huge spike in mid-August would suggest. The spike causes the sales estimates to accelerate rapidly and then flatten. If the share data were more normalized, weekly sales estimates would be smoother. Thus, the weekly estimates are volatile, and likely not accurate. Yet, the data probably does give a decent estimation of cumulative sales since the launch.

Here are a several thoughts regarding the spike in web usage seen the week beginning August 8:

1) Certainly the weekly run rate has slowed, as with any new product launch, but definitely not to the degree that the OS share data depicts. Larger proportion of early sales (1st 30 days) versus late sales (2nd 30-days) whereby internet usage is highest right after purchase and fades. Thus, early iPhone purchases caused pronounced acceleration and when usage faded, late iPhones with heavy usage don’t offset the early decline since it’s a smaller portion.

2) There is cannibalization of 2.5G iPhones from upgrades. Original iPhones that become inactive from new 3G purchases won’t increase market share measurements.  Of course, some legacy iPhones are sold or passed on.

3) Up until early August, supply was sporadic at Apple retail outlets, and virtually non-existant at AT&T and international carriers. A good number of orders were placed at AT&T outlets, but customers had to wait for their shipments to arrive. It’s possible than many customers who placed orders in July received them at the beginning of August when supply firmed, leading to higher web usage. 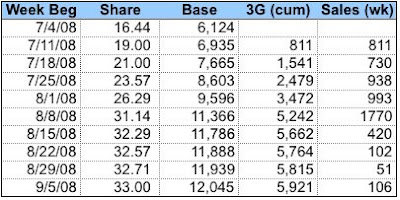 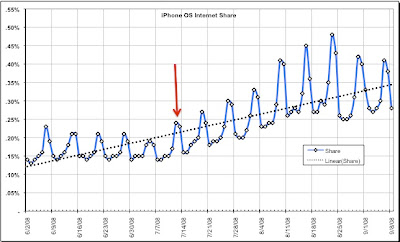 Members at the AFB board have been collecting IMEI numbers and recording those in a Google spreadsheet. The theory is that the IMEI numbers follow a consecutive sequence, and tracking them can reveal the number of units produced so far. The highest IMEI number submitted so far points to 5.604 million from a iPhone purchased on August 30. Fortune’s Elmer-DeWitt wrote about this approach September 1st. This model corroborates the Net Application data and my calculations, suggesting unit sales have approached 6 million.

These are the latest estimates that I have been able to find, however they may have been revised since.

Apple’s 3G iPhone appears to be selling ahead of Street estimates which may provide an opportunity for upside surprise when Apple reports Q4 results in October.  Even though demand has cooled from launch day, Apple has to supply the channel which suffered an inventory drought for over a month after the 3G model was released. Domestically, iPhone shipments will go being going to over 2000 AT&T outlets and nearly 1000 BestBuy locations. Abroad, some 50 countries will have their inventories replenished. This should give a boost to iPhone sales as the quarter comes to a close.

Looking at  the OS market share data, the focus should be on cumulative units, as opposed to weekly change. I believe that some aberrations in the measurement may have lead to that abnormal spike seen at the beginning of August. This causes the subsequent weekly changes to show a pronounced slowdown which is likely exaggerated. We also must remember that some 3G models replace legacy iPhones which will not increase market share numbers, thus won’t account for new 3G unit sales.

The  number to watch will be cash flow when Apple reports. The iPhone has the potential to significantly boost cash earnings. I discussed this implication back at the end of July- Apple’s Cash Earnings. On a cash earnings basis, Apple is very cheap at current levels.

Posted by Turley Muller 5 comments: Links to this post

5G Primer and Expectations (for early stages of US 5G networks)

5G is often described as revolutionary, delivering 20 gigabit speeds with near zero latency that will enable a number of disruptive technolo...